So, it wasn't a fluke. The wintery weather appears to be here to stay, at least through most of this week. The kids are making the best of it. 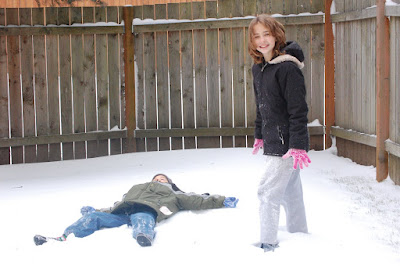 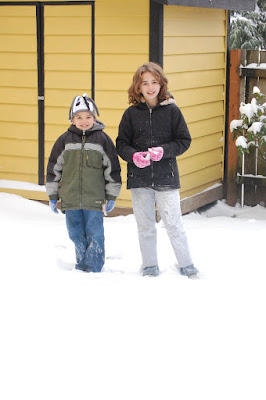 I didn't see them for long stretches today. Between outings - at least until the freezing rain began and they gave up on the Great Outdoors - they nuzzled up to a set of computers and joined the Club Penguin Mafia, hollering across the hall to meet up at the North Pole or some such nonsense.

I was awful close to mocking this computer socializing until I remembered, that, well, I blog and facebook and twitter - that I've modeled making friends online for years now. So, I kept my snarky Mom comments to myself.

And I surprised myself: I took a trip mid-day down to Trader Joe's, in the snow and ice.

(That thud just now? My Dad just passed out.)

I was a little nervous and a lot concerned about the lack of road on my journey, but I've been hoping to make my own enchilada sauce out of Nourishing Traditions, itching to give it a try with the broth I'd been simmering all day.

I had a few scary moments, but for a girl that has battled a driving phobia since 16, it was exhilarating. The sky did not fall, my car stayed on the road, and I came home ready to watch the snow continue to pile up, while I read next to the fire.

stephanie said…
You are bold, my friend. I made Stu drive me to my haircut yesterday.

Jodi Anderson said…
Good for you. While I love winter, I am very careful and a little nervous when it comes to driving. In fact, I asked for a tired upgrade for the holidays. :)
Sun Dec 21, 08:08:00 PM PST

JCK said…
It sounds like you are flying high! And full of Christmas cheer.

Suzanne said…
Yay! It is white here, too, with no evidence of stopping. You are brave with the driving, though. I'm a winter-driving pansy.
Sun Dec 21, 10:04:00 PM PST

Shana said…
My husband is from Chicago. I am from New Orleans. He does our winter driving. I'm a weenie. Unfortunately, he fancies himself quite the adept winter driver and to demonstrate his prowess he hit an empty parking lot on the way home from church yesterday to show Carlie and I his spinning skills. We were not amused.
Mon Dec 22, 08:17:00 AM PST

Anonymous said…
THUD! No really it's good you did the drive as long as all's well. It would probably be good to drive to a parking lot and get a better feel of it away from things that go crash(or thud!). At least Vancouver is flat land, not like here above Sandy with about two feet of snow, ice and hills. Most of the rigs on our road today are quads and snow machines. They go crazy fast. No mail or paper again today with Potty ELMO ready to go to Colorado as a Santa gift if the mailman would just pick him up! Hopefully he doesn't wet in the USPS box! Love, Dad
Mon Dec 22, 07:00:00 PM PST

lapoflux said…
Honey come on up and I'll teach you all about winter driving ;-)
Good on you - it can be scary.
Glad the kids liked the snow... we have lots but it's too cold to go out and play so mine are climbing the walls.
Tue Dec 23, 08:30:00 AM PST