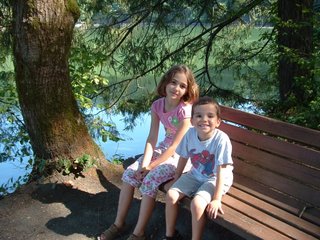 I have worn many titles since I became a Mama. I have been 'That's-not-my-Progeny-licking-the-QFC-floor" Mama. (I don't think anyone noticed that Lexi and I were wearing matching jackets on this oh-so-delightful trip to the store. Right?!) Lexi says it was because she was a dog. I am not sure how often you can use that excuse, dearheart, but watching you lap the frozen food aisle clean was a painful sight. (Before you ask why I didn't stop her, it wasn't entirely because I was a hapless parent. Zack was 4 days old and I had mastitis to boot. The licking began right as the cashier was ringing as up. I broke into a sweat, not sure if I should run to her, or stay with the newborn. I guess my postpartum brain figured she wasn't in too much danger of being snatched, what with the crazy dog behavior and all. I think the episode of joy ended with an ugly tantrum as the sweet puppy morphed into a stubborn 3 year old and a solemn vow that I would not being leaving my house again. Ever.)

Not that I got to keep my word because Zack had a lot of health problems when he was two and it became clear that he was delayed in his development. This meant many appointments and speech therapy--something I like to remember as the 'If-I-have-to-watch-my-sweet-son-struggle-to-say-MOREMARBLES-in-speech-therapy, I-will-surely-croak' Mama. I am amazed and grateful for what speech therapy did for Zack. And I am certain practicing making the 'em' sound produced 'mama', something I had waited for a long time. But watching him struggle through these exercises for hours was excruciating for me. And I am afraid to admit, terribly boring. I am sure if he could have spoke, he would have voiced his displeasure as well.

Last Friday night was a cause for celebration. I was supposed to get together for a girls' night with some friends. Greg was scheduled to be out-of-town that night, and I couldn't seem to line up a babysitter. So I brought my kids along. They are the oldest of the kids born to this particular set of mamas, and I hoped that as such, they could handle watching Curious George downstairs and playing with toys while I caught up with my friends. Maybe they sensed my desperation for grownup time. Maybe they have matured. Maybe they were just sick of hanging out with me too. They didn't make a peep. Better yet, there was no sibling bloodshed. Zack ended up crashing out and Lexi sat quietly watching a Disney channel movie. I felt sorta bad that she was awake and alone. But mainly I felt proud. I was a 'proud' Mama.
Email Post
Labels: Kiddos Motherhood